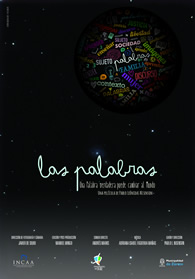 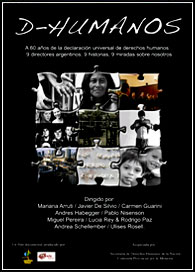 Human - R
Documentary film on human rights
Produced by: Audiovisuales del Sur SRL con el apoyo del Instituto Nacional de Cine y Artes Audiovisuales.
Sponsored by: Secretaría de Derechos Humanos de la Nación.
Comisión Provincial por la Memoria.
Asociación civil TVgrafías.
Reg. Prop. Intelectual Nº 659565
Síntesis63 years after the Universal Declaration of Human Rights, 9 relevant Argentine directors decided to undertake a complex task, reflect the status of these rights in their country. The 9 creative short documentaries that comprise the film are a reflection of our country and its people, our idiosyncrasies, problems and aspirations. And also a way to disclose the importance of this Declaration, which means betting to its fulfilment for everybody.
Ficha Técnica

What has to be Said

During a season of a year, seven young residents at a therapeutic community face a singular challenge: try to undergo a self-transformation.

All of them have to burden their history lives marked by deep conflictive familiar and social histories, drug addiction and, in some cases, by their tie to crime.

“What hast to be said” documents the difficult and sinuous process they have to carry on towards their own recovery, looking forward a different life.Shot in San Carlos de Bariloche and in Dina Huapi; in “Asumir” (Acceptance) - a rehabilitation clinic, and in “El Refugio de Jesús” (Jesus’ shelter) - a children’s home.

First feature-length documentary ever to be shot in B.A. penitentiaries.
Under the auspices of the Instituto Nacional de Cine y Artes Audiovisuales.

Overview: Two youngsters, serving time for burglary in Argentine penitentiaries. A woman who is taken into custody for murdering her husband - a former oppressor and torturer. A film director who decides to make these life stories into movies and, by doing so, becomes aware of how people shut themselves away in the "world of freedom".

Reality and its reflection:
Today, in the province of Buenos Aires alone, there are around 30,000 people in jail, most of whom are between 18 and 21 years old - the most vulnerable age. Boys and girls who have grown up in enclaves of increasing poverty, with conflict-ridden family backgrounds and human rights, trampled on.

The sacred cry” is the reflection of such a reality, and the first full-length documentary shot in Argentine jailhouses.